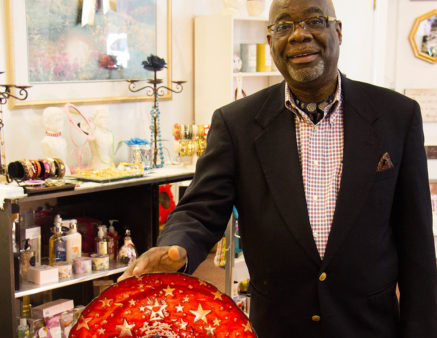 When you walk into Heritage Connections Gift Store you are surrounded by treasures, lots of treasures.

When you walk into Heritage Connections Gift Store you are surrounded by treasures, lots of treasures.  That was my experience as I went to interview the owner Ronnie Shoultz. Ronnie epitomizes the notion of a man of distinction who is well dressed, even in casual clothing.   As you scan the shop you realize that everything has its place and everyone who would come in can find something that they could take home.

Everything is displayed like it is telling a story; the scarf and pocketbook displayed together as if to speak to you that you cannot have one without the other and when you wear me you will be noticed. .

Things got interesting when Ronnie revealed that he is a tailor and designer in addition to running Heritage Connections Gift Shop in downtown Lynchburg. Ronnie and his wife, South Carolina natives, made their home and business here in Lynchburg Virginia a successful venture. His business started in the Holiday Inn Select with two partners, then transitioned to the end of Main Street in the old Betty Brite Cleaners and finally to the Galleria with him being the sole owner.

There are three departments within Heritage Connection – a Gift Shop, a Tailor/Alteration Studio and The Flagship store for FANFARE, a line of men’s scarfs and ascots that is designed and distributed by Ronnie.  Ronnie tells the American Dream story about his early interest in sewing which was “taboo” for men in his early years. His aunt, a seamstress sparked his interest in sewing, creating and designing and at a very young age he watched and assisted her starting with taking out seams.   He partnered with his aunt years later and launched a successful clothing business in Atlanta, Georgia. They would travel together to do fashion shows but he did not become serious about the clothing business until he came to Lynchburg.  The alteration aspect of his business is what he especially enjoys. Ron takes great care in every piece of material that he works on focusing on that assignment before moving on to the next. He is a creator who has an eye for designing that special dress or the perfect scarf.  Because of the prime location of the store, business has been abundant and he is highly recommended by his clientele.

Fanfare, his designer creation, carries a line of bow-ties, neck-ties and the distinguished ascot. Ronnie describes the ascot as the type of neck ware that is worn by the uncommon man. Most men, he explains will not wear an ascot because it takes a certain type of man to wear it and be comfortable wearing it. His scarfs are his best seller.  At the time of this interview he was completely sold out with more on the way.