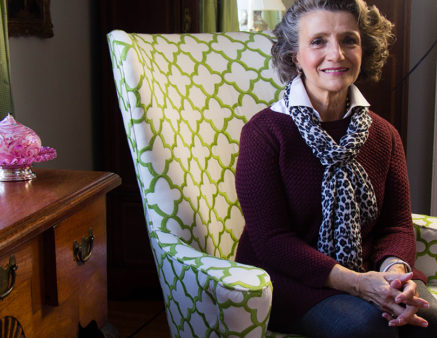 According to Beacon of Hope, their mission is to ensure that all students who graduate from Lynchburg City Schools are prepared for the next step in life.

Joan greeted us at her front door and invited us into her beautifully decorated home dressed in casual chic that seems to be an extension of her understated elegant deameanor. As I sat down with Joan to chat abour her present role at Beacon of Hope, it was as if we had known each other for years.  When she began to expound on the initiatives of Beacon of Hope, the sparkle that came to her eyes was also evident in her speech. What transpired next was awe-inspiring to me as I listened to Joan pour out her heart about the “why” of Lynchburg Beacon of Hope.

Beacon of Hope is a private non-profit organization whose mission is to invest in youth for community transformation.  Laura Hamilton is the Executive Director and Joan’s role is that of Director of Development.  Joan came to widespread recognition in the city of Lynchburg when she became the first female mayor of Lynchburg; a role she had for eight years.  She now serves the city as a councilwoman at large and as an advocate for post high school success for Lynchburg City students via Beacon of Hope. This is a role she tenaciously executes. She is relentlessly on the phone, researching for grants and  seeking funding for this non-profit program.

Beacon of Hope evolved out of the Community Dialogue on Race and Racism. Beacon took what was gleaned from the Dialogue on Race and Racism and incorporated the objective of providing opportunities to higher education for socially and economically disadvantaged students. In its infant stage, the group that would later become the Beacon of Hope decided to use what they had learned by setting a goal to make sure that if any student in the Lynchburg City School system wanted to pursue a secondary education they would be supported by the Lynchburg community. The group soon realized that support meant money, therefore, the next task for this committee were strategies to underwrite that goal. It took two years of research into making this an achievable goal. Laura Hamilton, who is now the Executive Director of Beacon of Hope, came on board and did a phenomenal job in researching how other cities in other states funded similar programs. Out of this research and meetings Beacon of Hope was born and it has been in existence for four years now. Joan highlighted the fact that Beacon of Hope supports and serves all students regardless of a students’ economic status or level of academic achievement. 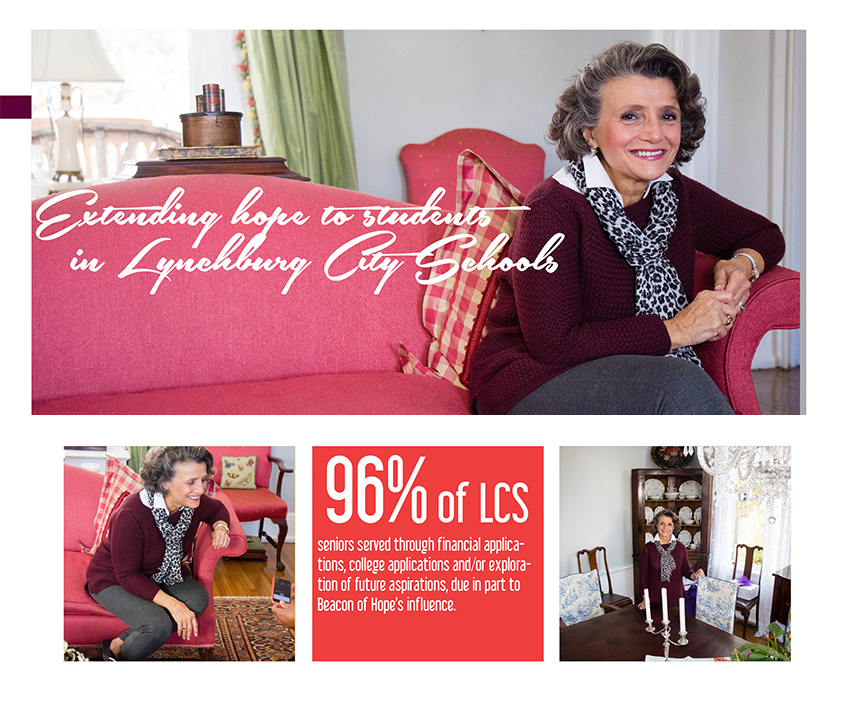 According to Beacon of Hope, their mission is to ensure that all students who graduate from Lynchburg City Schools are prepared for the next step in life. This includes acceptance to a 4 year college, a 2 year college- technical/community/ trade school or an industry certificate. The educational committee wanted to close the gap between “the haves” and “the have nots”. They wanted children to know that their area zip code did not determine their success in life.

In the little time that this program has been in existence it has accomplished more than the committee could have imagined.

The success and the statistics report of the graduating rate of E.C. Glass and Heritage High School are astounding in comparison to before Beacon of Hope was an option. Beacon of Hope is the first program of this kind to be implimented in the Commonwealth.

The statistics are impressive but Joan is not slowing down in her pursuit of greater funding and greater results for the students in the Lynchburg School System.

Joan’s other passion is her family. She is care-giver to her mother who resides at West Minister. As she spoke about her mother, you soon realize the bond between mother and daughter. She visits or calls her every day and at the time of this interview she was preparing dinner for her mother and some of her mothers’ friends at West Minister. Like a lot of other women that care for their elderly parents, Joan’s plate can be full. There are times when she gets overwhelmed and need to regroup. She credits her daughters for helping her maintain a semblance of balance.

Sign up to receive timely, useful information in your inbox.